Craig Frank, CEO of Kaya Holdings Inc. (OTCQB: KAYS) opened the door to the Kaya Shack on Thursday morning to a line of eager customers, “We are open for recreational sales! Sorry for the wait.”

“We’ve been waiting years for this, a few more minutes is no big deal,” a customer replied.

On Oct. 1, 2015, the state of Oregon began allowing recreational sales of cannabis to adults 21 and over through all licensed medical dispensaries in the state. Kaya Shack has been operating as a medical dispensary in downtown Portland since July of 2014.

The Kaya Shack is unique as the first dispensary actively owned and operated by a public company in the United States. While many cannabis companies have an aversion to “touching the plant,” Craig Frank and his team decided years ago to embrace the challenges that come with it.

“We want to touch the plant,” said Frank, as he supervised the Kaya Shack staff conduct the store’s first recreational sales. “It’s been a challenge. You have to be very careful to stay within compliance, but there’s always a mad rush once new rules come out. It’s hurry up and wait.”

The demand for the product was evident. More than a dozen customers were lined up when the Kaya Shack opened, and several local dispensaries had similar overflow. But the Kaya Shack team isn’t overly worried about competition.

“Portland is a big market. And it’s definitely saturated. But we have some advantages,” said Dave Jones, Kaya Holdings’ Business Development advisor. Jones led us on a tour of their warehouse, busy with construction as they prepare for additional throughput. “Robert Mondavi and Bacardi created brands with mass appeal, and that’s what we’re doing. We want a store that a soccer mom would feel comfortable in.”

The store’s branding reflects that sentiment. Signage throughout the store reminded customers and staff alike to reflect on kindness and compassion.

As customers continued to stream through the store, Frank, reflecting on the moment, remarked, “It’s a really historic day. When historians write about legalization, they’ll talk about the first public company to do this. But we’ll continue being very careful. In this business it’s just one inch between hero and dumbass.” 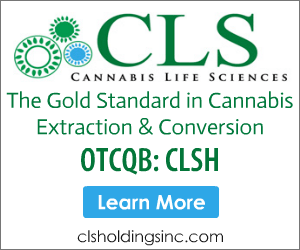